A nurse administers a measles vaccine to a boy in the school of Lapaivka village near the western Ukrainian city of Lviv. Nine people, including two children, have died of measles in Ukraine this year. — AFP photo PARIS: Just 10 countries were responsible for three-quarters of a global surge in measles cases last year, the United Nations children’s agency (Unicef) said yesterday, including one of the world’s richest nations, France. Ninety-eight countries reported more cases of measles in 2018 compared with 2017, and the world body warned that conflict, complacency and the growing anti-vaccine movement threatened to undo decades of …read more Source: The Borneo...

WASHINGTON: President Donald Trump’s former campaign chief Paul Manafort faces up to 24 years in prison after being found to have violated his plea deal with Special Counsel Robert Mueller’s Russia investigation, a court document filed said. Mueller’s office said it agreed with a Justice Department calculation that Manafort should face “235 to 293 months, a fine range of US$50,000 to US$24,371,497.74, a term of supervised release of up to five years, restitution in the amount of US$24,815,108.74, and forfeiture in the amount of US$4,412,500,” the filing said. Paul Manafort Earlier this month, federal district judge Amy Berman Jackson agreed with prosecutors that …read more Source: The Borneo... 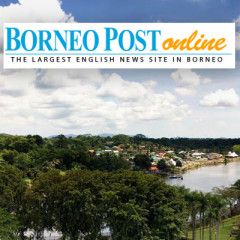 A nurse administers a measles vaccine to a boy in the school of Lapaivka village near the western Ukrainian city of Lviv. Nine people, including two children, have died of measles in Ukraine this year. — AFP photo PARIS: Just 10 countries were responsible for three-quarters of a global surge in measles cases last year, the United Nations...

Fully veiled women fleing from the Baghouz area in the eastern Syrian province of Deir Ezzor give out their name during an operation by the US-backed Syrian Democratic Forces to expel hundreds of Islamic State group jihadists from the region. — AFP photo NEAR BAGHOUZ, Syria: The ferocious battle for the Islamic State group’s last bastion in...

A crew member rescued from one of two ships, which caught fire in the Kerch Strait, disembarks on arrival at a port in Kerch, Crimea. — Reuters photo MOSCOW: Two ships ablaze in the Black Sea region, leaving at least 10 crew dead, caught fire while transferring fuel mid-sea after one vessel was barred from using its usual port in southern Russia...

Facebook will be keeping an eye on political advertisers during a country’s election season. AFP File Photo Facebook said Tuesday it will tighten rules for political ads in countries with elections scheduled in the first half of the year, building on transparency efforts already underway in the United States, Britain and Brazil after a...

FBI opened probe into whether Trump working for Russians

Putin attends a meeting with officials and representatives of Russian business community at the Kremlin in Moscow. — Reuters photo MOSCOW: Russian President Vladimir Putin, in a New Year letter to his US counterpart Donald Trump, said that Moscow was ready for dialogue on a “wide-ranging agenda”, the Kremlin said yesterday. At the end of...

KIEV: Several thousand Ukrainians rallied outside one of Kiev’s main cathedrals yesterday ahead of a historic synod expected to establish an Orthodox church independent from Russia. Ukrainian priests were to meet in Kiev’s 11th-century Saint Sophia Cathedral to work towards founding the church, in what Kiev authorities hope will be a...